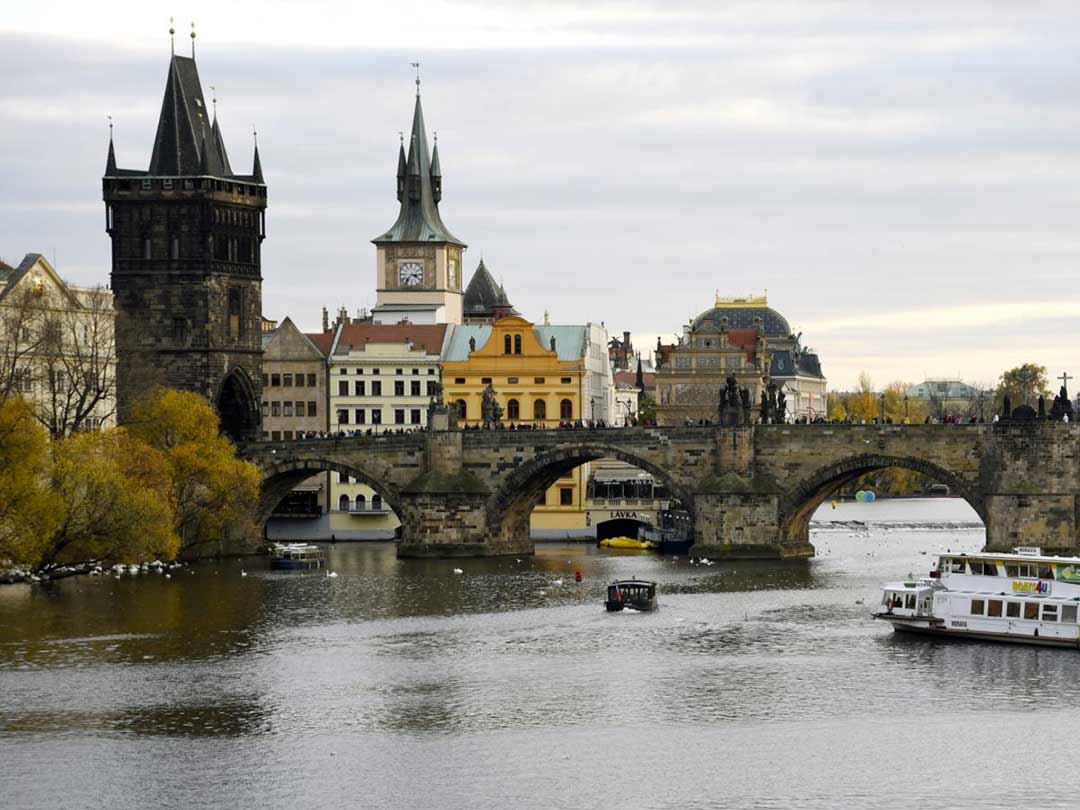 Thirty years ago, Prague was a mystery to travelers in Europe; now, however, it is one of the most popular destinations on the continent, drawing about 4 million visitors each year. Prague offers a compact city center, a fascinating centuries-long history, splendid examples of Romanesque, Gothic, Baroque, Renaissance and Art Nouveau architecture, scores of palaces, churches, parks and squares, delicious local Czech beer and food and reasonable prices.

One of the original gates into Old Town Prague, this tower was first built in the 11th century and rebuilt in the 15th century. During the 17th century, the tower was used for storing gunpowder, which is where it gets its name. The royal route, the coronation route of the Bohemian kings, started at the tower, through Old Town, across the Charles Bridge and up to Prague Castle and St. Vitus Cathedral where the kings were crowned.

Powder Tower is connected by a covered bridge to what used to be the palace of King Vladislav II who rebuilt the tower in 1475. The former palace is now the Municipal House and remains connected to the tower. Inside the tower is a spiral staircase with 186 steps leading up to the gallery where visitors can get great view of Old Town.

Prague is known for its centuries-long span of architectural styles, with the end of the 20th century exemplified by the deconstructivist building Dancing House, created by Czech architect Valdo Milunic and Canadian Frank Gehry. This remarkable structure contains both dynamic and static elements, and resembles a female dancer swaying in the arms of her male partner, the Fred Astaire and Ginger Rogers of the architectural world. Located on the bank of the Vltava River and Resslova Street, Dancing House is a private office building except for a restaurant on the 7th floor, the Celeste, which is open to the public.

Dancing House stands in strict contrast to the classical architecture surrounding it, which includes buildings in Art Nouveau, Neo-Gothic and Neo-Baroque styles. Its ultra modern design created public outcries and controversy during its construction; years later, Prague is proud to show off its splendid Dancing House.

In Josefov, Prague’s former Jewish Quarter, is the oldest active synagogue in Europe, the Old-New Synagogue. Legend tells that stones from the Second Temple in Jerusalem were brought to Prague by angels to build the walls of the synagogue. Prague’s first gothic building, the Old-New Synagogue was completed in 1270 and has held divine services ever since, except for the Nazi occupation of 1942-45. The synagogue became the heart of the Jewish Quarter.

The Old-New Synagogue is also the home of Prague’s Golem, or so legend has it. In the 16th century, Rabbi Jehud Löwa created the golem from clay and animated it with breath and a parchment bearing instructions placed in its mouth. When the Golem went mad and became aggressive, the Rabbi returned it to clay, stating that when hard times for Jewish people came again, the Golem could be re-awakened.

The Church of Our Lady before Tyn graces the Old Town Square. Among the most well-known attractions in Prague, the church’s Gothic towers soar 80 meters (260 ft) into the sky and can be seen from all parts of the city. Like many other Prague churches, the site’s original building was an 11th century Romanesque church built for foreign merchants who came to Tyn Courtyard for trade. The present church was constructed in the 14th century, although the roof, towers and gables came years later. Inside, Tyn Church holds many works of art in Gothic, Baroque and Renaissance styles. Our Lady before Tyn’s architects were Petr Parler and Matthias of Arras, who created many of Prague’s Gothic buildings.

On the other end of Charles Bridge from Old Town Square lies the Malá Strana or Lesser Town district. Baroque architecture is the rule in Malá Strana, although its history dates back to 1257 when it was founded as a royal town. The Baroque St. Nicholas Church and the extensive Wallenstein Palace dominate the area.

The district hosts palaces, churches, squares, parks, gardens and many other attractions. Surrounding Lesser Town Square are pubs, shops, restaurants and international embassies, housed in grand old Baroque buildings. Towering over Malá Strana is Prague Castle, which can be reached by a hike up picturesque Nerudova Street. Houses on the street boast heraldic emblems and beasts such as the White Swan, the Golden Horseshoe and the Red Eagle. Travelers longing for a quiet walk in a park should head for Vojan Park or Petrin Hill.

A highlight of Old Town Square is Prague’s astronomical clock, a complicated, ancient “orloj” that reveals Babylonian time, Old Bohemian time, German time and sidereal time, as well as sunrise and sunset, phases of the moon and the sun’s position in the zodiac. Crafted in 1410 by a clockmaker and a professor of mathematics, the clock has been repaired and maintained for over 600 years, making it the third oldest clock in the world. The figures of the Apostles, which are shown in the two upper windows every hour, were added in 1865.

When the clock strikes the hour, bells ring, the Walk of the Apostles begins, the Gothic sculptures move, a cock crows and a trumpeter blast sets off a tourist-pleasing show, a sight everyone should see at least once. For the most fanfare, catch the display at noon or at midnight.

Towering above the city is Prague Castle, more of a sprawling complex than a single defensive building. The castle buildings span centuries and consists of a royal palace, a cathedral and three churches, a basilica, a monastery, defensive towers, royal stables, a tiny lane where craftsmen worked and magnificent gardens. Prague Castle began as a wooden fortress with earthen bulwarks in the 9th century; by the 11th century, it included a royal palace and the 14th century saw the beginning of St. Vitus Cathedral. The cathedral in the castle complex is a jewel in Prague’s crown, a superb example of Gothic architecture. Kings and emperors are buried here.

Located between Wenceslas Square and the Charles Bridge, Prague’s Old Town Square is often bursting with tourists and locals in the summer. Czech’s long history is exemplified in the medley of architectural styles: Romanesque, Baroque, Rococo, Gothic and Renaissance are all represented in the superb buildings around the square. Soaring Gothic towers that rise from Tyn Cathedral contrasts with the Baroque style of St. Nicholas while Old Town Hall consists of a collection of Gothic and Renaissance buildings. Entranced visitors wander through the square, stopping for a spot of people-watching at one of the outdoor cafes or studying the square’s central statue of Jan Hus, church reformer and martyr.

Connecting Old Town and Lesser Town over the River Vltava is the 600 year-old Charles Bridge, Prague’s most iconic landmark. King Charles IV commissioned the bridge in 1357, replacing the Judith Bridge which was destroyed by a flood in 1342. Thirty Baroque statues line the sides of the pedestrian bridge along with myriad vendor’s stalls, musicians, performance artists and beggars. A bustling, busy area, the bridge is almost never empty of people, although seeing it at dawn or in the evening will mean fewer crowds. Prague Castle, looming above, is lit at night, and provides a dramatic vista that enchants all visitors. On each end of the Charles Bridge rests a tower that offers a great view of the bridge to those who climb the steps.